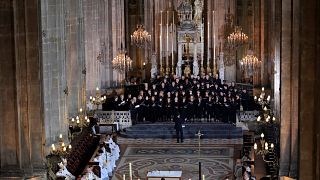 Victor Hugo described Notre Dame as “a vast symphony of stone”. So when the Cathedral burned last week, many in its choir worried that after more than 850 years, the music had also stopped.

“It’s like this relative that’s sick, and that we can’t see for a while,” said Matthias Daeu, a member of the choir.

Notre Dame, the gothic cathedral which caught fire last week was the choir’s home, but they won't be homeless.

The choir’s director says he has had hundreds of offers from Cathedrals around the world to host the choir. “The cathedral, we think it isn’t dead, just sick and the choir isn’t sick, it will continue to live,” he said.

For Easter Sunday the choir sang at the historic Saint-Eastache cathedral, in an emotional recital in front of the very firefighters who saved their Cathedral.

“The acoustic sound kind of like Notre Dame,” says Mathilde Ortscheidt, another choir member, though she adds, “but nothing sounds to me like Notre Dame.”

Now the choir hopes to turn tragedy into opportunity, and take Notre Dame’s music to the world.

“I hope we get to travel. Maybe to America - that would be lovely,” she says with a grin.