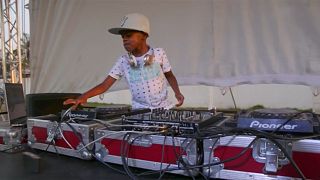 Oratilwe Hlongwane is one of the world's youngest DJs.

Better known as Arch Jnr, the six-year-old is often hired to play at different events, including concerts, private shows and festivals.

In January, he received a standing ovation when he participated in America's Got Talent: The Champions.

He has travelled with his sets to several countries, including Botswana, Spain and Saudi Arabia and has negotiated several sponsorship agreements.