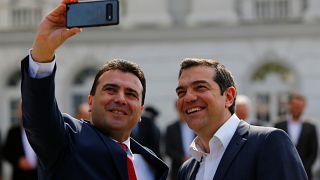 It was all smiles and selfies as Alexis Tsipras became the first Greek prime minister to pay an official visit since 1991 to the newly named North Macedonia on Tuesday in a display of newly-friendly relations since a near 30-year name dispute was settled earlier this year.

The Alternate Foreign Minister, Sia Anagnostopoulou, spoke to Euronews on the importance of this visit less than a year after the signing of the Prespa Agreement.

The Prespa agreement saw The Former Yugoslav Republic of Macedonia change its name to North Macedonia. It was hoped that this would settle the dispute over a territory in Greece which is also called Macedonia.

“The culture of mutual understanding and mutual trust dominated by the Prespa Agreement is practically implemented with this visit. The agreements to be signed there are to the mutual benefit of the citizens of both countries. It’s very important because we see that these were requests of the local societies which now, thanks to the Prespa Agreement, are involved in the big picture” said Anagnostopoulou.

The Minister commented on the issue of the commercial use of the adjective Macedonian that has come up in recent international exhibitions and fairs, concerning the use of Macedonian name for Greek products.

“We know that businesses from North Macedonia were using, until the signing of the Prespa Agreement, the name Macedonian but mainly they claimed that the products were coming from the Republic of Macedonia, which was then the constitutional name of the country. There was an issue raised for an exhibition in China, but no one knows that since 2000 and until the signing of Prespa Agreement at least 10 Greek businesses could not have the name “Macedonian”, because there was no deal between the two countries” Anagnostopoulou told Euronews.

_CORRECTION: We mistakenly write that Tsipras met with North Macedonia's President, Gjorge Ivanov. He did not, he met with Zoran Zaev. We apologise for the error. _