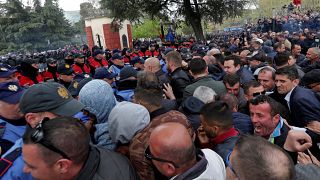 Albanian opposition protesters on Thursday made further attempts to enter the country's parliament by force as they demand the government's resignation and an early election.

The opposition says they will hold protests whenever the parliament convenes in weekly sessions. A bigger rally is planned for mid-April.