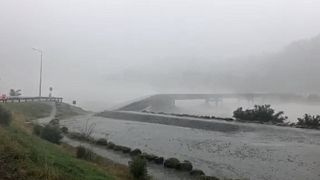 The bridge in South Island's Franz Josef's township could be seen slowly breaking apart, spilling concrete and asphalt into the swelling Waiho river, accompanied by a loud disintegrating sound.

Local media reported that roads have been closed, with the main river swelling to record levels and a state of emergency has been declared in the wider Westland district.

New Zealand's MetService had issued a severe weather warning earlier, with forecasts of up to 700 millimetres of rain.