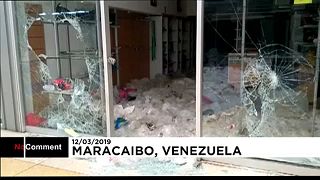 A shopping centre in the Venezuelan city of Maracaibo was looted on Monday (March 11) night as parts of Venezuela continue to be affected by a blackout.

According to the manager of the Sambil shopping centre, 105 of 270 stores were affected by the looting, and broken glass from storefronts could be seen strewn across the floor of the shopping centre.

Power returned to many parts of the country on Tuesday (March 12), including some areas that had not had electricity since last Thursday (March 07), according to witnesses and social media.