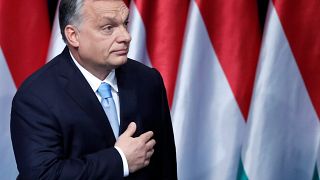 On Sunday, Viktor Orban rejected claims from the German newspaper Die Welt Am Sonntag that the posters had used anti-Semitic undertones. Orban accused the author of projecting German attitudes on the billboards.

“These pictures don’t remind anyone of anti-Semitism in Hungary,” he told the newspaper. “We don’t view our Jewish compatriots primarily as Jews but as Hungarians. A campaign focused in on specific persons is not unusual in the Anglo-Saxon world, and here neither. It seems to me this is a German problem”.

European Commission Vice President Frans Timmermans will now take the place of Juncker on the next round of the campaign. Expected to be published on the 15th March, Timmermans was designated by Orban as Hungary’s next “target” after Juncker.

The campaign itself is now getting pushback. Opposition party group Momentum launch what they called a “reality campaign” which involves the placing of stickers over the billboards. Messages are designed to highlight problems facing Hungary –They include: "Every sixth Hungarian child is born abroad" or "There are no family doctors in over 400 districts" and "Over 4,000 teachers are missing from schools."