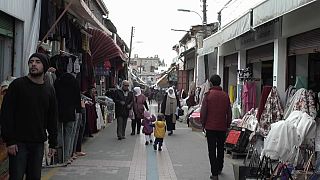 Greek and Turkish Cypriot leaders meet with peace on the agenda

Leaders of the estranged Greek and Turkish Cypriot communities met today in Cyprus to discuss plans of resuming peace talks.

The meeting comes after talks between the two sides broke down in 2017.

According to a UN statement the two leaders discussed and agreed on confidence building measures for telecommunications and electricity. This concerns the operation of separate agreements between suppliers in both regions and interconnection with regard to electricity networks. In particular, they decided to make an interim agreement on the supply of electricity.

Moustafa Akinji, as a move of goodwill, as stated in the announcement, decided to return the paintings of Greek artists who remained in the Turkish Cypriot side since 1974.

In his statements, the president of the Cypriot republic spoke about obsessions about certain positions that remain, he said that the issue of security for all the Cypriots cannot be ignored and he referred again to the Turkish troops on the island.

The Greek Cypriot side has repeated many times that in order to really go back to settlement talks, both sides should be willing to discuss all issues.

As analysts stress out today there was a meeting that was informal but important for the future.

Journalist Kristina Jovanovski told Euronews that the talks are important for Turkey, because an announcement of a possible oil discovery around Cyprus is expected.

“Turkey doesn’t have almost any kind of energy resources and that leads to it having to rely on Russia and Iran for gas,” she said.

“That has led to a limit of how much the Turkish President could become an independent regional leader, it has also led to issues with some of Turkey’s allies. So, Turkey now has a real motivation in increasing cooperation with the Greek side,” Jovanovski added.