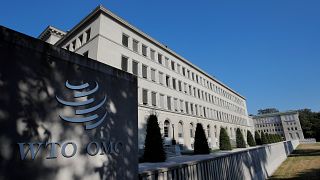 Britain would go to the bottom of the international pecking order in the case of a no-deal Brexit, a former Director General of the World Trade Organisation has said.

Pascal Lamy likened a hard exit to “jumping off a cliff without a parachute”.

“What happens in the next days is you move down from first league to fourth league, and you have to apply tariffs, borders, controls and I’m not talking about specific arrangements of airlines, capital markets, nuclear safety. It’s not ready, nobody is ready, for a no deal, which is by the way the reason I think it will not happen. People are wise enough not to jump off the cliff without a parachute,” Lamy said.

And he told Good Morning Europe that the idea the United Kingdom would be able to negotiate improved terms in bilateral trade deals “made no sense”.

“I know that’s a view from the Brexit side that they become independent, they regain control, in a world which is globalising, integrating, I think it makes absolutely no sense. What would be the sense, I mean the real sense of having a regulation for 60 million people, when the world is moving to zones that have regulations for 500 million people or 600 million people. It makes no sense. It has a name in economics it’s called economies of scale.”