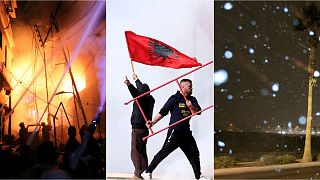 Dhaka fire, Albania protest, and Vegas snow | No Comment of the week

Here is our selection of the best No Comment videos this week from across Europe and beyond.

Opposition supporters broke through a police cordon on Saturday (February 16) and began smashing on the doors of Prime Minister Edi Rama’s headquarters in the Albanian capital Tirana.

They threw petrol bombs and flares in their bid to evade officers.

Protesters are calling on Rama to step down amid a scandal-plagued plan to build a ring-road around the capital.

France President Emmanuel Macron was among the political caricatures to feature at the 135th Carnival parade in the southern French city of Nice. German Chancellor Angela Merkel, US President Donald Trump and his Russian counterpart Vladimir Putin also made an "appearance".

Forget the caricatures. The real Emmanuel Macron visited a Jewish cemetery in France where a grave had been vandalised with a swastika.

At least 56 people died in a blaze in an old part of the Bangladeshi capital Dhaka. The fire broke out in a four-storey building and quickly spread to neighbouring structures.

Pro-independence Catalan protesters clashed with riot police in Barcelona on Thursday as they demonstrated against an ongoing trial in Madrid. A dozen Catalan separatist leaders are being tried for their part in a 2017 referendum and Catalonia’s subsequent declaration of independence from the rest of Spain.

Las Vegas got a rare taste of winter weather, with significant snowfall across the area for the first time in a decade.