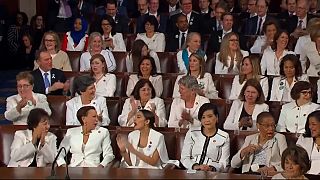 US President Donald Trump drew cheers from a group of female House Democrats on Tuesday during the State of the Union speech when he noted employment gains by women.

Dozens and dozens of House Democrats - and a few of their male colleagues - put on a display of solidarity Tuesday, wearing white, the colour of the suffragists, paying tribute to the women who came before them, and giving nod to their own history-making place as more women than ever were elected to give Democrats the House majority.