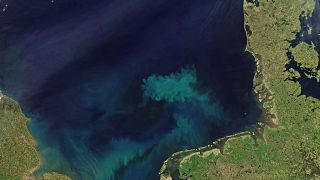 Colour of oceans to change by end of 21st century

The colour of the oceans could be about to change.

That’s according to a new study by scientists at the Massachusetts Institute of Technology.

The study found that because climate change is affecting the oceans ecosystems, this could alter the colour of the water as early as the end of the twenty-first century.

Though the change is unlikely to be a radical one, we could be about to see brighter blues and stronger greens as global warming pushes temperatures up.

It all comes down to a tiny organism called phytoplankton, or algae, which contains chlorophyll and lives in the ocean. These organisms are responsible for much of the colour we see.

As temperatures continue to rise, the numbers of these organisms in different locations will change causing a predicted 50% of the world’s oceans to change colour.

The numbers of phytoplankton present in oceans is crucial. According to Pete Strutton, an Associate Professor at the Institute for Marine and Antarctic Studies at the University of Tasmania, “Phytoplankton produce half of the oxygen in the earth’s atmosphere and are at the very base of the food chain.”

Numbers of phytoplankton in areas such as the subtropics are predicted to fall, causing oceans to take on a much bluer colour. Whereas water around the poles could be set to get even greener.

For Mr. Strutton, “What this study has shown is that although the greenness of the oceans, the amount of chlorophyll might only be changing by small amounts, what’s important is that the type of phytoplankton might be changing more dramatically. This change could have consequences, for example for fisheries and also on the ability of the ocean to take up carbon dioxide. If the productivity of the ocean changes, it will impact that ability.”

As global warming causes ice to melt, phytoplankton will grow in the waters left behind, causing the colour of our oceans to intensify.