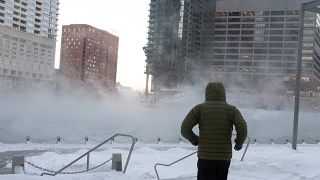 Polar vortex: Millions hit by freezing temperatures in US

The weather has been blamed for twelve deaths, according to Reuters.

In Chicago, temperatures have plummeted to nearly minus 30 Celsius degrees, with residents dubbing the city "Chiberia". Steam could even be seen rising up over the waters of Lake Michigan.

In scenes reminiscent of the film franchise 'Back to the Future', rails looked like they'd been set alight as gas-fed switch heaters were employed to stop switch points from icing at the windy city's busiest interlock point.

"Before the installation of the gas-fed heaters, maintainers relied on more interesting (and far more dangerous) systems of melting snow and ice. Workers had to fill what were called “smudge pots" with kerosene, stick them in the spaces between the track ties and light them. This was all done by hand" commuter rail operator Metra added in a press release.

On Wednesday, even some Hamilton (Chicago) performances were cancelled, due to weather conditions.

The severe weather across the country has led to thousands of flights being cancelled, as well as schools and universities being closed.

States of emergency have been declared in some areas and the US Postal Service said it would suspend deliveries in certain locations.

In many places the advice is to stay inside.

The cause of the big freeze — the polar vortex — was a large area of low pressure over the North Pole, which was rotating anti-clockwise around the stratosphere. Beneath this lay a dense layer of arctic air that was pushed south over the US.

“The polar vortex isn't anything new, it's always been there, we have known about it for about 70 or 80 years,” Minnesota State Climatologist Luigi Romolo told Good Morning Europe.

Click on the player above to watch the full interview with Luigi Romolo.