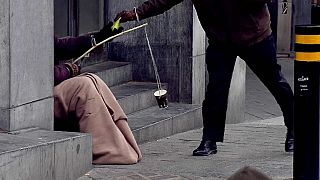 A conference is taking place at the European Parliament today to discuss how to tackle poverty and social exclusion, which affect nearly half the population of some member states.

The European Parliament's Fighting Against Poverty group and the European Anti-Poverty network are discussing the root causes of exclusion and deprivation.

It's expected to be a major issue in the upcoming European elections and has led to protests such as the Yellow Vests in France and anti-austerity demonstrations in Greece and other countries.

The conference will be an opportunity to exchange information and views on the Poverty Watch reports from Finland, Spain, Italy and Lithuania.

"It is necessary to take poverty and social exclusion seriously and we hope the forthcoming elections will see a change in dealing with these issues in Europe.

"Our report shows that 120 million people around Europe are suffering from poverty and social exclusion. The total didn't go down as the economic recovery took place. In Spain for example, nearly a quarter of the population are affected. In Bulgaria and Romania, the total is 45%."