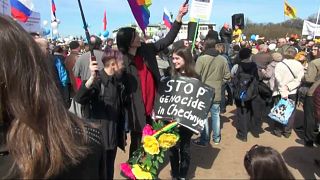 In Chechnya, activists are warning of fresh persecution of LGBTQ individuals. The Russian LGBT Network has reported that two people have died and around 40 are in detention, potentially experiencing torture, because of their sexual orientation.

In 2017, the Russian Republic was accused of an extreme crackdown that saw some people secretly leave the country and resettle in Canada. At the time, in an interview with HBO, Chechen leader Ramzan Kadyrov said that such a crackdown couldn't exist, as there are no gay people in Chechnya.

Elena Milishina is a Russian investigative journalist who broke the story in Novoya Gazeta in 2017. She says she has confirmed reports of at least one dead since the end of last year in Chechnya, and that the gay community in the region is still using online chat groups to connect- a factor that may lead to their discovery.

"Since 2017 when we broke the story, the detentions of these people never stopped, even the murders," Milishina told Good Morning Europe on Thursday.

"The difference between the situation that happened in 2017 is that back then, it was sort of an ideological persecution of gay people in Chechnya, and Ramzan Kadyrov the leader of Chechnya many times publicly said that it was clearing Chechen blood from those people, they shouldn't exist among Chechen society, they should be killed. This time, it looks like there was no such kind of order from the Chechen authorities. It was the initiative of Chechen police who use those people as a source of getting money- blackmail."