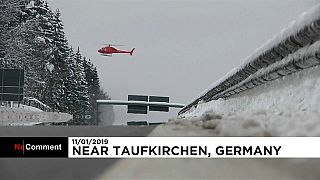 Helicopter propellers used to remove snow on trees in Bavaria

A private helicopter could be seen on Friday (January 11) using its propellers to remove thick layers of snow on top of trees along the highway connecting the towns of Taufkirchen and Holzkirchen, close to the German city of Munich.

According to officials, the snow on the pine trees weighs several tons and could fall onto passing cars.

Five districts in Bavaria have declared a state of emergency due to heavy snow, with schools closing, roads being blocked, and some towns even asking the German army to help clear snow off the roofs of private and public buildings.