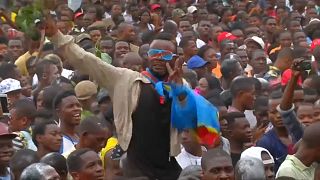 Exuberant supporters of Congo opposition leader Felix Tshisekedi celebrated his surprise win in the presidential election on Thursday after waiting for hours to hear the results.

After the Democratic Republic of Congo's electoral commission declared Tshisekedi the winner, the runner-up Martin Fayulu dismissed the outcome as an "electoral coup".

The result sets the stage for Congo's first democratic transfer of power, but also a tense political standoff with the potential for the kind of violence that followed polls in 2006 and 2011.

Dozens of people have held a candlelight vigil in Jakarta on Sunday following the deaths of at least 125 people at a soccer match.