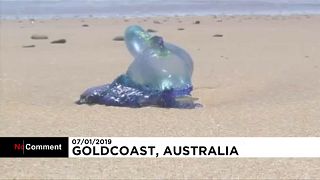 Hundreds of thousands of fish die en mass in Australia

Hundreds of thousands of fish died in outback Australia, with the government blaming the mass death on a toxic algae bloom caused by changing weather conditions.

The New South Wales Department of Primary Industries said that a sudden cooling of the temperature over the weekend killed a pre-existing algae bloom in the area, resulting in the decomposing algae draining oxygen from the river and killing the fish.