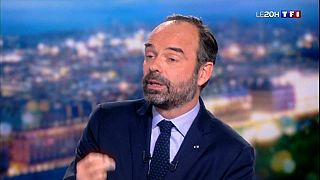 The French Prime Minister Edouard Philippe has announced plans to toughen up laws in response to the ongoing Yellow Vest protests.

It follows the eighth straight weekend of violent demonstrations across France. On Saturday, protestors in Paris smashed the gates to a government office and cars and motorbikes were set alight.

Draft legislation will ban the use of face masks and ensure demonstrators register their protest. 80 thousand police will also be deployed for the next set of protests.