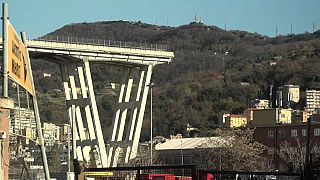 Four months ago, Genoa’s main motorway bridge collapsed – killing 43 people and leaving many who lived in the vicinity homeless.

Luca Infantino is a firefighter from Genoa - on the 14th of August he was on duty. He never thought that one day he would be face to face with such a disaster in his home city.

"I've driven across that bridge many times. It could have happened to me or to any of my relatives. What I find terrible is that - as a consequence of what happened - the city is now split in two," he said.

This Christmas, the streets around the bridge are unusually empty and silent. Residents living in the area had to leave their homes and most of the local shops closed following the collapse.

Businesses in the city have also suffered. With losses of over 400 million euros, companies are finding it hard to survive. Road traffic between the port city and the rest of Europe has been significantly disrupted, and authorities have been trying to find alternative routes to the bridge.

The port of Genoa is one of the most important in Europe. In the last 10 years its productivity has increased by 60% - but now 3.000 companies operating there are worried about their future.

"This (the collapse) has meant re-structuring our activities and creating a new way of moving around the city,” explains Giampaolo Botta, CEO of freight transport operation "Spediporto".

Many fear that the 12 month state of emergency declared in the region will not be enough to heal Genoa's wounds.