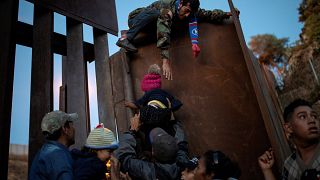 Representatives from over 100 countries are in Morocco today for the UN Global Migration Summit, trying to find enough common ground to sign the final draft of a migration pact-

But a series of major countries have already pulled out of the negotiations. Some call the language in the agreement too weak, and others call it too strong.

The United States, Australia, Hungary, Switzerland, Israel, Austria, the Czech Republic, Slovakia and Italy have all withdrawn from the summit altogether.

Criticism of the deal is focused on the idea that it endangers a country's sovereignty, though the pact is not actually legally binding.

Herbert Kickl, the Austrian minister of the interior spoke about his country's decision in the runup to the conference.

"Since a few months, we are following a new course for the migration problem with a new compromise on the table," he said. "We think that our three components model will allow us to go much further than with the one size fits all approach"

"The percentage of Europe's population born outside Europe is 4 percent, it is a shame that Europeans say that they remain unable to integrate a population that means less than 4 percent, even in relation to refugees. We received [last year] one million, that is one million when compared with 500 million people in Europe. Proportionally Angolans, for example, receive more migrants, more refugees, Jordanians receive more refugees, Egyptians receive more refugees and migrants than us, and they are not as wealthy as we or have strong institutions. So, there is a populist outpouring message that must be rejected."