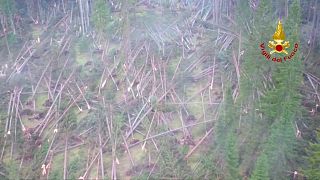 Thousands of trees were razed in the northern Italian province of Belluno after violent storms battered the country this week, resulting in at least 20 deaths.

Winds of up to 90 kilometres-per-hour razed centuries-old pines in Trentino Alto Adige and Veneto, while in the Dolomites, thousands of red spruces were razed and dragged away.

Earlier this week, the extreme weather left Venice inundated with historic high water levels, leading to the evacuation of tourists from the centre.