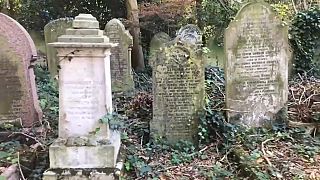 Month of The Dead: Exploring the darker side of London's history

In Britain, Londoners have been celebrating the darker side of their city's history with the annual Month Of The Dead event.

It lasts throughout October – with its final day timed to coincide with Halloween on the 31st of the month – and it consists of a series of walks, lectures and workshops across the English capital city, all relating to themes of death and the supernatural.

A nighttime walk through one of London’s oldest cemeteries, a taxidermy workshop, and a lecture about death masks are just a few of the 42 spooky experiences on the agenda.

The Month Of The Dead was set up by curators A Curious Invitation and their partners Antique Beat, with the aim of exploring the city's relationship with its deceased residents.

20% of the ticket revenue from each event is donated to its host venues, which include several of London's historic 'Magnificent Seven' cemeteries.

Several new venues have been added this year - St Bride's Church, the London Bone Archive, and a medieval ossuary in Spitalfields.