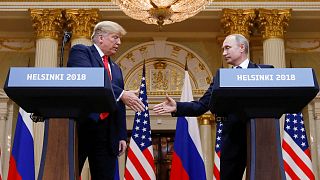 Russia slams US plan to withdraw from nuclear treaty

Supporters say it sends a strong message to Russia. Critics say it tears up a landmark arms control treaty.

President Donald Trump says the United States will pull out of the Intermediate-Range Nuclear Forces Treaty (INF) because Russia is violating it – something Moscow denies.

Russian Deputy Foreign Minister Sergei Ryabkov warned on Sunday (October 21) that a unilateral withdrawal would be "very dangerous" and lead to a "military-technical" retaliation.

As our correspondent Galina Polonskaya reports, US National Security Adviser John Bolton is in Moscow this week, where he will be asked to explain the move.

The INF, signed in 1987 by then US president Ronald Reagan and Soviet leader Mikhail Gorbachev, banned all ground-launched missiles with a range of between 500 and 5,500km – thus capable of hitting Europe or Alaska.

Russia has consistently denied violating the treaty, which was the first ever arms-control agreement to eliminate an entire class of missiles.

Trump said the United States would develop the weapons unless Russia and China agree to a halt on development. China is not a party to the treaty.

Gorbachev, now aged 87, said it would be a mistake for Washington to quit the treaty, and that it would undermine work he and U.S. counterparts did to end the Cold War arms race.

On Monday, Chinese foreign ministry spokeswoman Hua Chunying said a unilateral withdrawal would have a negative impact on many sides. She urged the United States to "prudently" handle the issue and to "think thrice before acting".