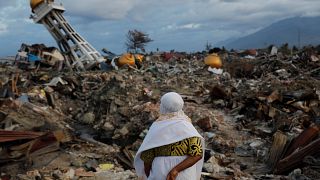 More than 5,000 people are feared missing in Indonesia

More than 5,000 people are feared missing in Indonesia, 10 days after the devastating earthquake and tsunami hit the country.

The official death toll rose to 1,944, but bodies are still being recovered.

Most of the dead from the earthquake and tsunami were in Palu, the region's main urban centre.

"This is already the deadliest earthquake in the world this year. The second deadliest was also here in Indonesia in August and that followed another one in July," said Bill Neely, NBC News' Chief Global Correspondent, who was in Palu, Indonesia.

There is an ongoing search for victims but the government said it will stop recovery operations on Thursday.

Some limited searching might continue but large-scale searches with many personnel and heavy equipment would cease on Oct. 11, according to the national disaster mitigation agency.

The government has allocated $37 million to help victims of the earthquake.