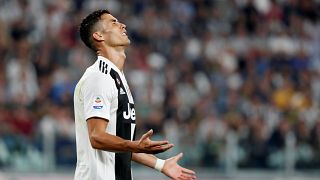 The most famous footballer in the world, backed by one of the most famous sportswear brands in the world — but maybe not forever. The Nike checkmark has long endorsed the biggest names in sports, and Cristiano Ronaldo is without a doubt one of, if not the biggest names. He has a sponsorship contract with them worth a reported 1 billion dollars. Now, Nike has expressed "deep concern" about a rape allegation levelled against the Portuguese footballer, and other consequences are starting to pile up too — EA seems to have scrubbed the star from all online promotions for its FIFA 19 game, where he was the picture on the homepage just last week. Now, the homepage shows a picture of people playing the video game.

"We have seen the concerning report that details allegations against Cristiano Ronaldo," said EA Sports in a statement. "We are closely monitoring the situation, as we expect cover athletes and ambassadors to conduct themselves in a manner that is consistent with EA's values."

In addition, the Portuguese national team has left him off the roster for upcoming matches. The club he currently plays for however, Juventus, has defended him on Twitter saying he showed "great professionalism and dedication" in his time so far with the club. "The events allegedly dating back to almost 10 years ago do not change this opinion, which is shared by anyone who has come into contact with this great champion," said the short statement.

Of course it's not good news for Ronaldo that his major sponsors are expressing trepadation, but it's a far cry from being dropped altogether. In the same press conference where he left Ronaldo off the roster, Portuguese head coach Fernando Santos called him "my friend" and did not rule out a future return to the team. And there's no real interruption to that 1 billion dollar Nike contract yet, just a statement that they'll be watching.

Exactly what they'll be watching is the legal proceedings between Kathryn Mayorga and Cristiano Ronaldo in the coming weeks. Mayorga has filed a lawsuit seeking to have a previous nondisclosure agreement made void, and Las Vegas police said on Tuesday that they are reopening the criminal case.

"As of September 2018, the case has been reopened and our detectives are following up on information being provided," said the statement.

The rape claim dates back to 2009, when Mayorga met Ronaldo at a Vegas nightclub. She claims he invited her and her friends back to his hotel. When she went into a room in the hotel to change before joining the others in a hot tub, she claims he came into the room after her and raped her. The allegation was first reported in German magazine Der Spiegel.