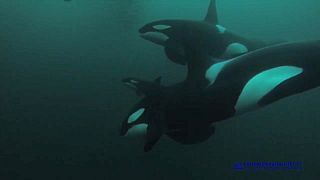 Half of the world's killer whale population in danger, study says

PCBs (polychlorinated biphenyls) have been banned for decades, but they still have harmful effects on the ocean, putting half of the world’s orca population in danger.

A research published in Science magazine found that PCBs threaten killer whales the most as they are at the top of the food chain.

“It really does look quite serious for them,” said Dr Nahiid Stephens, veterinary pathologist at Murdoch University in Perth, Australia.

“A number of them are really facing significant threats from dietary restrictions, so the added stress from PCB load is a significant concern.”

PCBs are highly toxic chemical compounds that were once used widely. Their production was banned decades ago, but they are still leaching into the ocean.

“Unfortunately they [PCBs] bioaccumulate in the environment and also in the tissues of animals,” Dr Stevens added.

PCBs can increase the risk of cancer as well as reproductive problems and issues with the function of the immune systems of vertebrates.

“They have really significant effects on how the body may function and what the researchers are really concerned about in the study is the effect on reproduction of these already very vulnerable, small populations.”

Dr Stephens says that once PCBs are in the environment, it can take decades until they break down.

“What we really need to think about, in terms of helping orcas, is to not place them under other stress that we have control over.”

She added that we also need to think about land management and waste management, to try and prevent leaching of PCBs out into the water and the ocean.