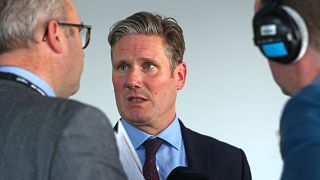 Britain's main opposition party is expected to announce today that it will order MP's to vote down the Prime Minister's current Brexit proposals. It comes as debate roars over a fresh referendum.

Shadow Brexit Secretary Keir Starmer is expected to tell the Labour Party conference that if the six tests set by the Labour Party on the Brussels-deal is are not passed then MP’s will be told to vote against the plan.

The party is hoping that with the government defeated it would open up a new possibility of a new election and “if we cannot get a general election, Labour must support all options remaining on the table, including campaigning for a public vote."

Euronews correspondent Vincent McAviney is at the Labour conference.