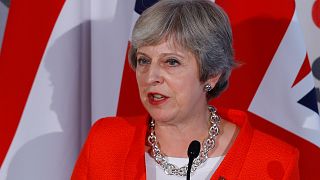 Theresa May rattled in Salzburg

The good will is gone this morning in Salzburg — EU leaders have left, and so has the prospect of a Brexit compromise. The 27 heads of other EU countries got together to reject Theresa May's Chequer's plan, heating up the negotiations weeks away from the deal deadline. It was a sour surprise for the UK Prime Minister who expected good things from the Salzburg summit — an EU official even admitted, “Things did not happen as we expected.”

May went to Salzburg looking for support. Facing criticism on all sides for her Chequers Brexit plan, a rapprochement with other EU leaders would have been a coup ahead of the Conservative Party conference. Chief Brexit negotiator Michel Barnier extended an olive branch in the lead up to the summit by saying the EU would be willing to "de-dramatise" the issue of the Irish border, and that a "softening" of their position was possible. For May, that wasn't good enough — though both sides are eager to avoid a so-called hard border in Ireland, the details are a sticking point.

She spoke for ten minutes in between dinner and coffee on Wednesday in an attempt to convince the group that her white paper should be supported. EU leaders debated without her on Thursday, and returned with a clear answer: No Chequers.

Emmanuel Macron was a key figure in the decision to push back. He told the others that the plan was "not acceptable," and then appeared in front of the cameras to slam Brexiteers.

“Those who explain that we can easily live without Europe, that everything is going to be all right, and that it’s going to bring a lot of money home are liars,” said Macron. “It’s even more true since they left the day after so as not to have to deal with it.”

Theresa May was visibly shaken at the final press conference of the summit. Sweating in a warm room, her tone was frustrated as she maintained her plan was the only viable option in the face of 27 rejections.

And May's battle is even more complicated by politics at home. Brexiteers in her own party have publicly trashed her plan and called for it to be abandoned, leaving her to enter the Conservative Party conference this month as an embattled Prime Minister.