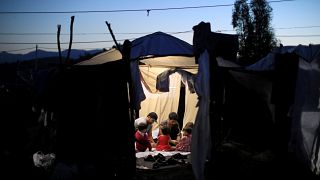 EU leaders met this morning for day two of the Salzburg summit intended to address the European migrant crisis, but the differences between the 27 EU leaders will be hard to bridge- Italy is searching for a solution that doesn't involve taking more migrants into Italy.

“At the moment there is a slight possibility that countries who don’t want to take in immigrants will help the union by giving money," Italy's prime minister Giuseppe Conte said after discussions began last night. “Some of the countries which don’t welcome asylum-seekers have already said they could agree to these terms.”

Other leaders had a different take this morning.

"We are not at a market- we're speaking about humans," said Luxembourg's Prime Minister, Xavier Bettel. "We are not speaking about carpets or goods. So if we start, if we begin talking about what is the price of an immigrant, it's a shame for all of us."

"It does feel like we're coming to a solution, but honestly the numbers of refugees are so small and to try and make political gains off the back of the weakest communities, it's not my style."

Greece is one of the countries that's been on the front line of the migration crisis from the very beginning. Moria refugee camp is one of Europe's largest, and the conditions in the camp are so bad that MSF called for the evacuation of vulnerable people such as children this week. It's in response to reports of sexual assault, self harm and suicide attempts among minors in the camp. Euronews Correspondent Fay Doulgkeri has been reporting from Lesbos, Greece, where the camp is located this week.

"Can you bathe a ten month old baby in cold water? You can't. It's not clean, it's not safe," one man living in the camp told her.

The camp currently houses 9,000 people in a facility built for 3,100. Greek authorities announced this week they will be moving 2,000 people from the camp to the Greek mainland later this month to ease overcrowding.

"It's obvious that we are not meeting the minimum requirements when it comes to sanitation and hygiene," said Adil Izemrane, founder of an NGO that works in Moria camp. "And that's mainly to do with there's no movement of people to the mainland and people are waiting very long. There are people here nearly for two years, waiting on their asylum procedures."