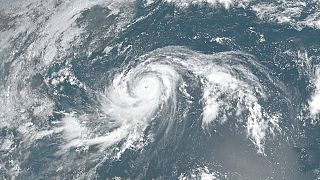 Thousands of people have been evacuated from their homes in the Philippines ahead of the arrival of the Super Typhoon, Mangkhut.

It's expected to make landfall later today and could reach a maximum speed of 268 kilometres an hour.

Clsre Nullis from the World Meteorological Organisation explained: "A Super Typhoon is a very, very strong tropical cyclone. It's the equivalent of a Category 5 hurricane"

"In the case of Mangkhut, it's a huge system and potentially very destructive."

Mangkhut is the strongest typhoon to hit the Philippines so far this year and it has already passed through Guam and the Mariana Islands.

Residents are securing the roofs with rope and boarding up the windows of their homes as well as stocking up on food and clean water.

Farmers in Ilocos Norte are also rushing to harvest their crops before they are destroyed by the storm.

Mangkhut, or Ompong as it is known in the Philippines, is expected to make landfall over the Cagayan-Isabela area on Saturday morning if it continues to move west-northwest at its current speed.