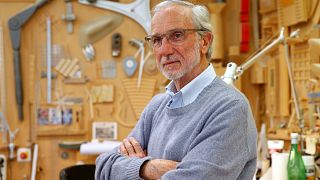 The project presented by architect Renzo Piano to replace the collapsed bridge in Genoa is an iron, almost white bridge, that brings to mind a boat. It can store sunlight that can later be illuminated in the night. It has 43 poles in remembrance of 43 victims who were killed in the August 14 disaster. The project has been presented on the birthday (September 7) of the president of Liguria Region and Emergency Commissioner, Giovanni Toti.