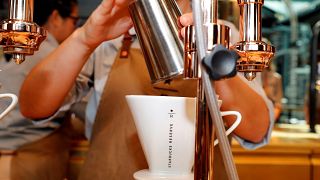 Pumpkin spice lattes are moving in on espresso's turf as Starbucks opens its first Italian location today, in Milan. It's no ordinary Starbucks either — the spiritual home of espresso has gotten an extra special store. Located in a echoey old palazzo that used to be a post office, the "Reserve Roastery" is 25,000 square feet and features a heated bartop of Tuscan marble and a hand-chiseled floor. It's only the third Reserve store in the world, the others being in the birthplace of Starbucks, Seattle, and Shanghai.

And it must be true that one Starbucks store gets lonely. Smaller outlets, more in-line with what customers worldwide are familiar with, will be opening around Milan later this year.

Seattle may be the physical birthplace of Starbucks, but the chain's conceptual origins are in Italy. Italy was the place that first inspired Starbucks CEO Howard Schultz on a visit in 1983. He was captivated by the unique coffee culture that thrived in tiny local cafes.

"During my first trip to Milan in 1983 I was captivated by the sense of community I found in the city’s espresso bars — the moments of human connection that passed so freely and genuinely between baristas and their customers,” he said in a statement. 35 years later, it's a business coming full circle for Schultz.

"We are not coming here to teach Italians how to make coffee, we're coming here with humility and respect to show what we've learned,” he said last year when he announced the roastery. “This store will be the culmination of a great dream of mine.”

But that Italian coffee culture Schultz loved so much might make the Milan market a tough one to crack. Around six billion espressos are consumed in Italy every year, usually quickly, cheaply, and while leaning against the cafe counter. Lunchtime coffee is close to a religious experience in Italy, and it may be just as difficult to tempt people away from their beloved neighbourhood cafes as it will be to get them to pay a little more per cup. Starbucks is charging €1.80 for an espresso, nearly double the average price in the city. An Italian consumer group has already filed a complaint with the Italian competition watchdog, accusing Starbucks of overcharging.

Price aside, some locals swear they'll never set foot in the lavish cafe.

"I will never go there because I don't like it," one local man told Euronews Correspondent Claudio Lavagna in a coffee shop in Rome. "I think it's not an Italian thing to do, we are used to better things. Italian coffee is much better, even our cappuccinos."

"I've tried it already in Miami and I didn't like it," said another customer. "I don't like the flavour of their coffee. The Italian coffee is much better, without any doubt."

Even tourists might not be the market to count on. Another customer from California didn't have any plans of visiting the Roastery.

"When I come to Italy I want to go to a local coffee shop, and I want to be immersed in the culture instead of something that's everywhere," she said.

Starbucks has already anticipated some resistance, though. A testament to that? Frappucinos won't be on the menu in Italy. The menu is simpler and more geared towards Italian coffee tastes, according to the company. That means more espresso, less sugar. There are also artisanal cocktails and baked goods from local baker Rocco Princi on offer.