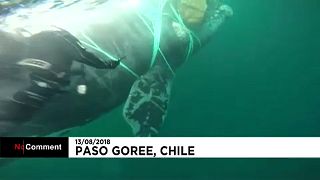 The Chilean Navy has freed a whale after it became trapped in a fishing net in the waters off the country's coast.

Rescuers, led by an Alacalufe General Service boat, travelled for more than three hours to reach the finned cetacean whale.

Quiroga described the whale as "very large" and said the fishing net "covered" the creature.