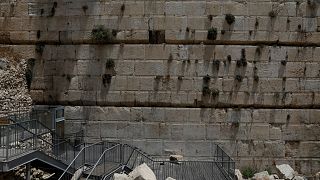 A large block of stone has fallen from the Western Wall in Jerusalem onto a prayer area. No one was hurt.

The rock weighed around 100 kilogrammes and landed on a platform which had been packed with male and female worshippers the day before for a ceremony to mark the destruction of the Jewish temples by the Romans in 70 CE.

The Western Wall is believed to be a surviving portion of one of the two temples constructed in the years before the turning of the first millennium.