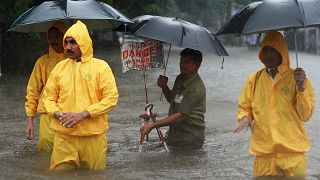 A local resident said the local municipal allots contracts for new developments, but contractors don't work on them, leading to flooding even with light rain.

Flooding is an annual problem during the monsoon season in South Asia, but the impact has worsened with crumbling civic infrastructure, clogged drains and uncontrolled urban expansion.