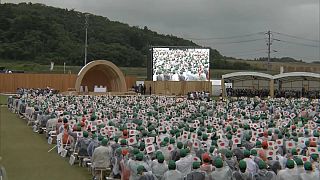 Japan's Emperor and Empress have attended an annual tree-planting ceremony in the city of Minamisōma, Fukushima Prefecture.

The city and other areas of northeastern Japan were devastated by the 2011 earthquake and tsunami.

The Emperor and Empress began a three-day tour of Fukushima Prefecture yesterday and left the city of Iwaki for Minamisōma this morning. They reportedly continued to look at the Fukushima Daiichi nuclear plant during the journey.

This was the last tree-planting ceremony for the Imperial couple before the Emperor abdicates in April next year.

In the tree-planting ceremony, the Imperial couple planted Japanese black and red pines and other trees. These will form part of a disaster prevention forest.

Local residents also hope the trees will become a symbol of Fukushima's reconstruction.

The Emperor says he is very happy to be planting trees with local people. He says he hopes the ceremony will help to deepen people's understanding of the importance of forests.