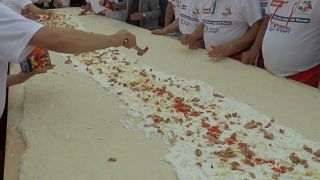 As many as 100 Neapolitan pizza makers set a new world record on Wednesday for a fried pizza that measured 7.15 metres.

After rolling out the dough, the chefs added the ingredients, closed the doughy parcel and dipped it the in a long vat of boiling oil — an effort that took hours.

The "pizzaioli" used 83kg of flour 50kg of mozzarella cheese, 15kg of ricotta cheese, 7kg of tomato sauce, 15kg of small bacon chunks known as "ciccioli," with basil leaves and pepper to top it off.

In December 2017, the art of the "pizzaioli" — a Neapolitan pizzamakers' speciality — was added to the UN's "Intangible Cultural Heritage of Humanity" list.