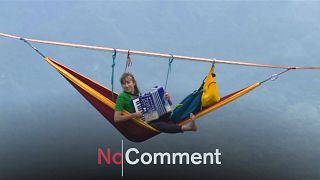 French band performs on slacklines 1,400m in the air

Six performers wearing safety belts went on "stage" where they played instruments while walking on tightropes high in the air.

With a beautiful sea of clouds and the picturesque mountain range as their backdrop, their show began with an ode to traditional Chinese folk music.

The performance drew waves of applause from the audience.