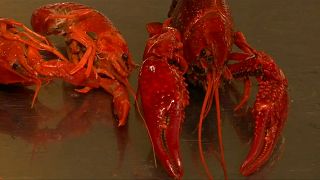 Berlin responds to crayfish plague: If you can't beat them, eat them

North American crayfish that spilled en masse into Berlin's parks last summer will soon be appearing in the city's restaurants after its government authorised fishermen to remove them from public ponds.

The red swamp crayfish, or Procambarus clarkii, are on the European Union's list of invasive alien species – but they are also popular in German aquariums.

To halt the invasion, the Berlin government licensed a local business to fish the 15cm (6 inch) crustaceans, which carry infections that native crayfish are not resistant to, out of the ponds in public parks that they have taken over.

Tests have established that the crayfish are fit for consumption and they are being distributed by Matthias Engels as 'Berlin Lobster'.

With the present trend towards regional food, they are the perfect product, he says.