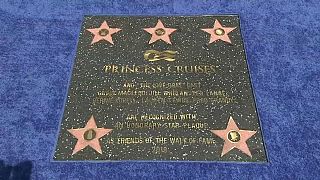 Stars of the classic comedy "The Love Boat" reunited Thursday (10 MAY 2018) to receive an honorary plaque on the Hollywood Walk of Fame.

Gavin MacLeod, who starred as Captain Merrill Stubing, sang a line of the show's iconic theme song before thanking fans for their support.

Co-star Fred Grandy was shocked to receive the honor alongside Princess Cruises, which served as the series' set for 10 seasons.

The "Love Boat" has been translated into more than 29 different languages and has aired in more than 93 countries.