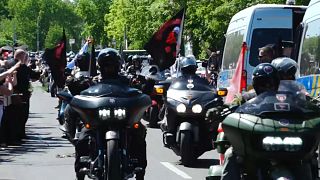 After paying tribute to the Russian soldiers in Prague, the Night Wolves are heading to Germany where they will end their journey in the city of Berlin

Russian motorcycle club the Night Wolves arrived in Prague on Monday - stopping off on their way to Berlin where they'll participate in celebrations marking the end of World War II. Known for their Russian nationalism and Kremlin ties, the bikers' presence in the Czech Republic is seen as highly controversial.

Visiting Prague’s Olshany Cemetary the Night Wolves were met by both supporters and critics. The different factions eventually got into a skirmish and two men were detained by police.

Many locals see their presence as politically provocative Russian propaganda. But the bikers say they are there to honour hundreds of Red Army soldiers who died liberating the country from Nazi Germany.