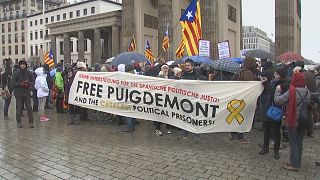 The National Assembly of Catalonia (ANC) gathered around 300 Catalan independence supporters in front of the Brandenburg Gate to demand the release of the region's former president Carles Puigdemont.

Participants waved Catalan flags and banners, which called the Spanish government a dictatorship and demanded the release of political prisoners.

Puigdemont was arrested by German police after crossing the border from Denmark last Sunday and is being held in prison in the town of Neumünster on a European arrest warrant. He is accused of sedition, rebellion and misuse of public funds.