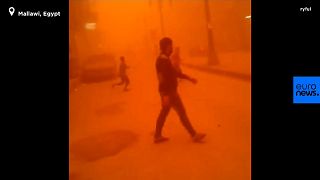 The government advised children and elderly citizens to stay indoors as heavy dust from Sudan, supported by winds from Europe, swept across the African nation.

Schools were suspended, and major roads and highways were closed down due to poor visibility amid the storm.

The emergency order was lifted in the evening, but traffic officials told drivers to turn on all car lights and slow down as Egypt’s meterological service warned the dust would likely continue for another day.