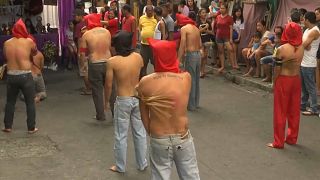 Catholic penitents in northern Philippines on Thursday flagellated themselves and carried wooden crosses in re-enacting the last hours of Jesus Christ.

Barefoot men from the rural town of Mabalacat in Pampanga Province, north of Manila, whipped their backs while marching on the streets, believing it would grant salvation from their sins. Some devotees allowed themselves to be cut with a razor.

The Catholic Church has expressed disapproval of these self-punishments as misinterpretations of faith, saying prayers and sincere repentance are enough to commemorate the observance of Lent, but devotees from Pampanga believe the rites will cleanse their sins, cure illnesses and even grant wishes.