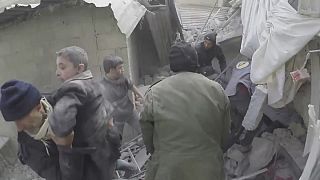 Rescues follow after strikes on Syrian city of Saqba

Reports on social media claim Eastern Ghouta was again bombarded by pro-government and Russian warplanes on February 26th, bringing the two-day death toll in the region to 44 people, despite the UN Security Council's unanimous approval on Saturday of a resolution demanding a 30-day cease-fire across Syria.

According to these reports, several towns and villages were struck throughout the day, including Douma and Saqba, from where the Syrian Civil Defense released footage showing the rescue effort in the aftermath of the strikes.