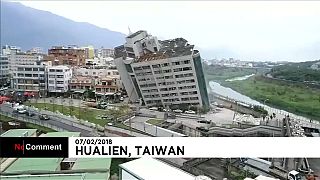 Rescuers save residents from building rocked by Taiwan quake

The video showed a shop selling motorcycle helmets shaking with some helmets falling off the shelves. The woman who appeared in the video escaped without injury.

Welson Zhang, whose family owns Tianyou Mao Hang helmet shop, told Reuters that everyone was safe and the building that they are occupying has been declared safe.

The quake hit about 22 km (14 miles) northeast of Hualien on Taiwan's east coast, Many people were believed to be still trapped inside buildings, some of which were tilting precariously. Officials said at least four people have died, 243 are injured and about 85 missing.