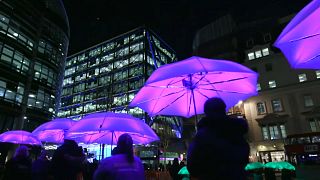 London paints in light to banish the winter blues

The laser projection onto one of London's most historic buildings is by French artist Patrice Warrener.

The work helps to pick out the architectural features of the Abbey's facade - and transforms the North and West doors with a dazzling array of colours.

This is one of the highlights of this year's Lumiere London, the UK's largest light festival.

58 installations are dotted around the capital and all are free and open to the public.

One of the most stunning pieces is Waterlicht by Dutch artist Daan Roosegaarde which takes over Granary Square in King's Cross.

Inspired by rising sea levels as a result of global warming, the installation places visitors beneath the blue waves which roll gently in the mists above.

Around the corner is Aether by Architecture Social Club, a British collective of designers, architects, technicians and poets.

This light and sound installation hangs above the public and invites an immersive experience.

Satyajit Das is founder of Architecture Social Club and controls Aether from behind his mixing desk and laptops.

He has been enjoying seeing the public's reaction to his installation.

He says: "It's been really lovely. People have been like glued to their phones, which is a compliment I guess. And they've been stood around and they're just absorbing this piece which is flattering to be honest."

Some people are even inspired to start dancing.

All of the installations have to be built to withstand the worst of a British winter and that has proven challenging - particularly for such a technology heavy installation like 'Aether'.

"Most of the last year, couple of months, have been working out how to make this windproof. We've been testing ideas, we've actually got about eight kilometres of mesh in there so it has to perform in this environment or we could be untangling for a year to come," says Das.

London's busy Leicester Square has been transformed into a nocturnal woodland scene with frogs, hares and badgers taking over the central gardens.

All set around the statue of Shakespeare, this space in the heart of theatreland was designed by artist Jo Pocock as a garden for quiet reflection.

Pocock has also been contending with some tricky weather as she battled to finish her installation against wind and rain.

In answer to the question "What's the hardest thing to contend with?" she says:

"The weather, we've been here installing for about three and a half days. First day it was raining pretty much all day, last night there were very strong winds and a few things got damaged. So working outdoors you have to make your work robust and be able to withstand the crazy weather we're having."

Over in Mayfair people are playing the Illumaphonium.

This musical sculpture by British artist Michael Davis features 100 illuminated bars which can be struck to make light and sound.

It is proving popular with all ages.

It's hard to imagine any more lights in Piccadilly Circus, but French artist Camille Gross has given the Hotel Cafe Royal a laser makeover.

The Royal Academy is also illuminated by an animation inspired by Matisse of a couple dancing.

Helen Marriage is the artistic director of Lumiere and she says the festival is all about brightening up the capital at a particularly depressing time of year.

"Apparently it's the gloomiest time of the year in London. It's when you've done your Christmas shopping, you've been to the sales, you've got a credit card bill, you're detoxing, you're trying to get fit, you've given up drinking, all of those things that people do at this time of the year, it makes people a bit sad so part of the reason for planning it for now is that it's at this turn of the season where we can brighten up people's lives," she says.

The festival stretches across the city from King's Cross in the north, to the West End and Mayfair and even over the river to the South Bank.

One of the most popular attractions by the riverside is The Wave, a tunnel of 40 triangular gates which respond to movement as crowds make their way through the installation.

At every turn Lumiere London throws up another surprise - like these street lights which have been replaced by giant angle-poise lamps.

Lumiere was commissioned by London's mayor Sadiq Khan, who claims it is not only the UK's largest light show but also the largest night time event in London.