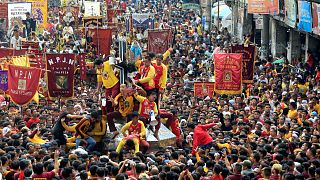 Endless throngs of devotees, many barefooted, joined a chaotic procession for a black Jesus Christ statue in the Philippine capital on Tuesday (Jan. 9).

From dawn, the crowds gathered in downtown Manila to follow a carriage bearing a centuries-old statue called the Black Nazarene, believed to have healing powers.

The parade, in which the faithful express gratitude to the statue for their blessings, is one of the biggest annual religious festivals in the predominantly Roman Catholic nation.

Around 380,000 people attended the Manila procession, based on an early estimate by police. Local media reported this year's celebrations may draw 17 million devotees nationwide.

Thousands of policemen and soldiers were deployed to ensure security. Philippine coast guard boats were watching especially closely when the crowd squeezed onto one of the capital's bridge to follow the procession.

The Philippine Red Cross said it had assisted more than 600 people who were feeling unwell, or suffered injuries as many clamoured to reach the icon.