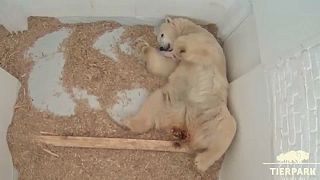 At the age of about three weeks, the little bear's ear canals are starting to open, allowing her to become more familiar with her environment.

The newborn bear cub has not yet been named.

Proud parents Tonja and Wolodja were both born in Moskow in 2009 and 2011 respectively.

Mother and cub are currently out of sight of visitors to the zoo. As in nature, they won't leave their shelter until the spring.